Sorting and recycling system in Zaatari refugee camp in Jordan

The Zaatari camp was created in 2011 for refugees from the Syrian crisis. It is the biggest refugee camp in the region, with almost 80,000 people living there. The recycling programme at Zaatari camp was carried out to mitigate the increased pressure on waste disposal while at the same time providing key livelihood opportunities for refugees. Currently, the recycling programme includes two recycling facilities operated by Oxfam.

The main objective of the recycling project of the Zaatari refugee camp is to alleviate the waste management challenges by sorting and recycling the waste generated in the refugee camp, as well as to offer key livelihood job opportunities to the Syrian refugees.

• The recycling project reduces the amount of residual waste by 1.5 tonnes per day (https://www.giz.de/en/mediacenter/75573.html);

• The total quantity of collected recyclable material since the opening of the centres is 4,780 tonnes (Information provided by the WES stakeholder’s consultation process)

• 30% of the camp are female headed households;

• More than 30 tonnes/day of waste is produced by the camp’s residents (https://www.giz.de/en/mediacenter/75573.html)

Between 2015 and 2016, Oxfam initiated the development of a pilot scale recycling project in the Zaatari refugee camp. The Deutsche Gesellschaft für Internationale Zusammenarbeit (GIZ) GmbH, on behalf of the German Federal Ministry for Economic Cooperation and Development (BMZ) and in cooperation with Oxfam, has been implementing the waste management program in the camp since 2016.

The recycling project in the Zaatari refugee camp relies on the collaboration of the Syrian residents of the camp and on national and local stakeholders such as the Government of Jordan and several NGOs.

Towards the end of 2016 and early 2017, Oxfam began to collaborate with the aid agencies Japan Emergency NGO (JEN) and Agency for Technical Cooperation and Development (ACTED), on the collecting and sorting activities in the refugee camp. This was also done in close coordination with UNHCR and UNICEF. The recycling project was funded by the Australian Department of Foreign Affairs and Trade, whereas the original pilot project was funded through Oxfam’s WASH Innovation Fund.

Due to the Syrian war that started in 2011, hundreds of thousands of people fled to Jordan and settled in the Zaatari refugee camp. At the time, waste facilities in the form of mobile ‘dumpsters’ were present, which however were constantly overflowed. It should be noted that at the nearby disposal site of Al Hussainiyat the amount of waste tripled due to the Zaatari refugee camp’s operation, making the need for the establishment of a more comprehensive waste management system imperative. Not to mention the concerns for infectious disease spread, environmental degradation and socio-economic problems.

In order to mitigate this increased pressure Oxfam – by working with the local community – sought to turn waste management into an opportunity to address these social, environmental and economic pressures. The recycling project was initially developed at pilot scale, serving only one District of the camp. The development of the initial project enabled a process of learning and adapting to the camp’s needs. By 2017 the project expanded to collecting, sorting and processing waste from all the districts of the camp.

Oxfam collects the recyclable waste (plastic, metals and paper/cardboard) from the households and market areas of Zaatari camp, while it provides collection services to the offices of INGOs and other stakeholders located in the camp. It should be mentioned that Oxfam is the sole service provider for organic waste (wet waste) collection and street cleanliness services inside Zaatari Camp.

The recycling project includes collection, sorting and recycling. More specifically, each family has two refuse bins – one for recyclables like cardboard, plastics and metal, and the other for everything else. The recyclable or ‘dry’ waste is collected and taken to the recycling facilities, where secondary separation occurs for plastic, metals, and paper/cardboard waste. Afterwards it is processed and packaged at the recycling facilities and sold to local buyers, re-introduced into manufacturing and operational processes. This reduces the need for the extraction of raw materials to produce goods, while reducing the environmental impact of waste generation in Jordan. Organic (‘wet’) waste is collected, weighed and transported to the nearby waste disposal site of Al Hussainiyat. Oxfam currently collects almost three (3) to four (4) tonnes of waste per day from the camp.

The financing cost recovery for recycling projects could be described as difficult in Jordan. However, with regards to the recycling project in the Zaatari refugee camp, multiple approaches have been applied to enhance the performance of the project and the refugees’ life. Oxfam introduced Cash for Work (CFW) activities for refugees in 2014. CFW is defined as cash payments provided on the condition of undertaking specific work. Payments are generally made based on the time and outputs of the job. The payments range from one (1) JOD per hour for semi-skilled workers to 2.5 JOD per hour for skilled and highly skilled workers.

For the operation of the recycling projects in Zaatari refugee camp, three groups of workers are involved along the process. The first group collects the waste and brings it to the recycling center, the second one sorts the waste into categories of recyclables and the third group sells the recyclables to Jordanian private recycling companies. The income generated from the sales of the recyclables is invested in operating and maintaining the centre, while the Cash for Work programme foots the bill for the workers’ wages, making it possible for men and women to feed their families.

The recycling scheme implemented in the camp focuses on:

• The project guaranteed access to job opportunities (through Cash for Work) in the field of Solid Waste Management for Syrian refugees and vulnerable Jordanians. In 2019, the program created over 1,000 jobs every month;

• The project led to the creation of Cash for Work jobs, which educate the community on recycling, collect recyclable materials from households, and process the waste into materials that can be sold to traders. In fact, 37% of the people recycling within the camp do it for a cleaner environment, 24% make money by selling products and 18% reuse the recyclables;

• 88% of households of the 80,000 residents separate their recyclable materials, which make their way to two recycling facilities operated by Oxfam;

• The amount of residual waste generated every day has decreased by more than four tonnes thanks to source separation;

• The amount of residual waste from the recycling projects is reduced by 1.5 tonnes per day, sifting out the recyclables to be sold;

• 81% of the refugees are participating in the collection and recycling program, particularly by separating plastic, cardboard, and metal from other waste.

The key factors of success of the project are the following:

The community-led approach plays a significant role in the project’s success. Community engagement helps in promoting messages on behaviour change and sustainable waste management practices, while ensuring that messages are disseminated through active engagement by the community members themselves.

The project includes integration with the local market, especially buyers, to promote the collected recyclable waste to local markets and even international markets at times.

One of the main challenges relating to the operation of the recycling project in the Zaatari refugee camp has been the restrictive nature of the camp settings. Given the closed and complex permit system of the camp, the trucks routing in and out of the camp, has been rather challenging and took time to be efficiently settled. Similarly, the access to local and international markets to sell the produced recyclables, has not been easy either. Finally, the community engagement in separating waste and getting involved in the recycling processes was a new concept that presented a bit of a challenge.

The recycling project in Zaatari refugee camp presents a rather good performance concerning the environmental impacts and the social inclusion of refugees. Its replicability is highly recommended but certainly challenging as there could be limitations due to the closed and complex permit system of the camps as well as the limited access to local and international markets.

Replicability could be successful in large hosting communities with less stringent restrictions on movements of materials. In addition, more integration with local communities and markets is needed to ensure that the project fits within the existing waste value chain for recyclable waste of the country.

The recycling project was initially implemented at pilot scale in District 7 of Zaatari between August 2015 and June 2016. The pilot scale recycling project operated for about 40 weeks, and in 2017 the project expanded to collecting, sorting, and processing waste from across the whole camp, including the 12 Districts. 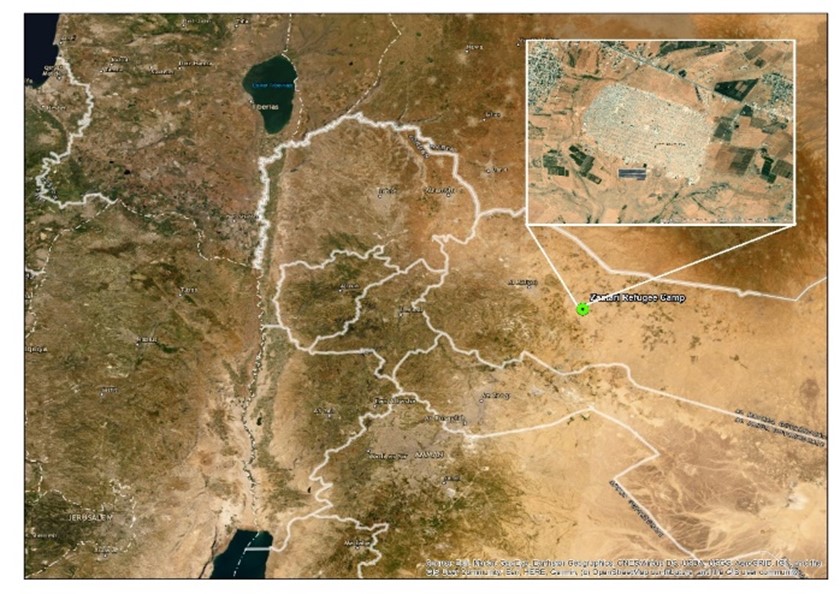 © 2023 Best practices in achieving waste reduction in the Mediterranean.