A tax on waste sent to landfill and to incineration, introducing refund criteria for local authorities.

The main objective of a landfill tax is to promote diversion from the landfill and encourage local authorities to improve source separation. The landfill tax implemented in Catalonia has the following objectives:

• Incentivise local authorities to reduce the quantities of waste sent to landfills.

The taxes were introduced by the Waste Agency of Catalonia ARC (Agència de Residus de Catalunya), the Regional body in charge of managing waste generated in the region.

• The Department of Planning and Sustainability of the Government of Catalonia, to which ARC belongs;

• The local authorities (municipalities and groups of municipalities) that paid the tax and received refunding;

• The owners and operators of landfilling sites and incineration plants, that have to collect the taxes.

There is no national landfill tax in Spain, but the regulation allows the waste authorities in autonomous regions to implement their own economic incentives to promote waste prevention and recycling. As an illustration, the Region of Catalonia implemented a tax on landfilling and incineration respectively in 2004 and 2009. These implementations were made in parallel with investment promoting separate collection and waste recovery.

This instrument is considered as very important for the implementation of the EU waste regulation in Catalonia, and to reach the targets set by the regional waste management and prevention programme (such as PRECAT 20, that set a target of 60% for biowaste recycling by 2020).

The evolution of the tax is presented in the table below:

The implementation relied on the involvement of landfill and incineration operators, who had to be persuaded to contribute and support the system.

The interesting feature of the Catalonian tax is that it introduced a mechanism to return part of the tax depending on the waste performance. About half of the revenue generated by the tax were used for investment in biowaste treatment facilities, while the other part is given back to the local authorities depending on their performance of bio-waste collection. The tax is set according to the quantities sent to landfills or incineration, with lower rates when a biowaste collection is implemented by the municipality. For instance, in 2016, the landfill tax amounted to €34.10 per tonne, and to €24.50 per tonne if the municipality had implemented a biowaste collection.

A “refund system” was also implemented for municipalities, with different criteria, e.g., on the existence of a separated collection with coefficients according to quality, the presence of a civic amenity site in the municipality, the existence of source-separation systems for specific fractions (such as paper or hazardous waste), etc. These different refunding criteria have evolved over time to reflect the evolution of waste collection and the decrease of revenues generated by the tax. Local authorities can apply every year for refunding. For instance, in 2015, municipalities were given €34 per tonne of biowaste collected, €3 per tonne of green waste collected, and respectively €20 and €60 for each home and community composting unit installed.

An interesting aspect of this instrument is that it generates income for the Catalan Waste Management Fund, while requiring little investment. In addition, it strengthened the monitoring and control mechanism of how the tax operates and municipalities are refunded.

This measure had a very positive impact on regional recycling performance: selective collection rates rose from 22.6% in 2003 to 39% in 2012, and almost all of the 947 Catalonian local authorities implemented biowaste collection. At first, the disposal tax led to the increase of sorted biowaste with quite a high level of contamination. A quality criterion was then introduced to address this issue: in 2018, no refunding is given if contamination is higher than 14%. 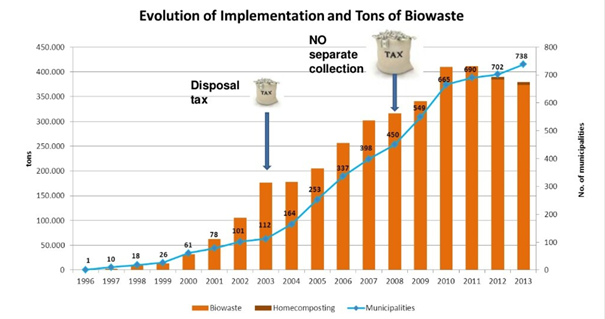 The evolution of collected quantities for biowaste, paper and packaging waste, and residual waste, is presented in the figure below: 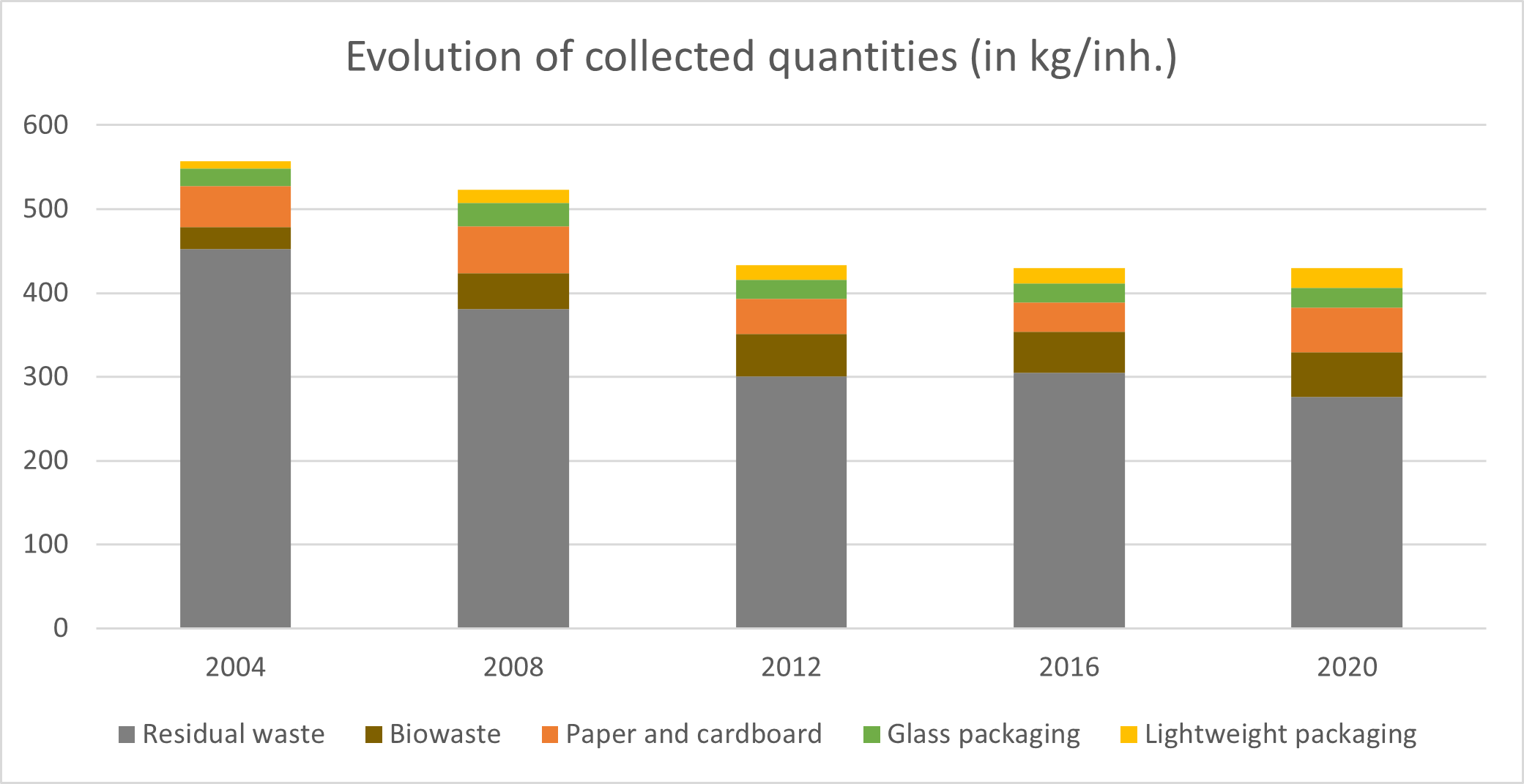 Even if the evolution can be linked with other policy instruments implemented over this period, there is a sharp decrease of residual waste and a parallel increase of biowaste between 2008 and 2012, when the taxes were implemented or started to increase.

Several factors of success can be noted:

• The revenues generated by the tax are allocated to waste management strategies and infrastructure;

• The refund scheme brings a “positive incentive” to the tax, and provides possibilities and resources for municipalities to promote separate collection;

• The use of quality criteria contributed to making sure that the separated biowaste can be used to produce quality compost.

The following challenges can be mentioned:

• At first, there was a tendency to collect large quantities of contaminated biowaste that were delivered to the biowaste recycling plants, causing problems. The introduction of quality criteria forced municipalities to also focus on the quality of compost.

• Some municipalities attempted to avoid the tax by classifying municipal waste as industrial waste, which required a proper control mechanism.

• The improvement of performances and the decrease of quantities sent to disposal might lead to a decrease of the revenues generated by the tax, leading to a decrease of resources to fund waste management. Revisions of the landfill and incineration taxes are necessary to maintain the economic balance of the system.

This instrument proved to be quite effective to boost separate collection and recycling in Catalonia; it has also been used in many other European territories with good results (e.g. in Flanders, Belgium). It requires little investment to be put in place, yet several elements are necessary:

• A proper monitoring and control mechanism of the waste flows and the quality of sorted biowaste to properly set the taxes, and to avoid illegal disposal;

• The control of the payments and refunding requires an additional administrative workload for the regional authority and the municipalities;

• Municipalities must have access to recycling routes where they can send the waste diverted from landfills (e.g. composting or anaerobic digestion plants).

• ACR (2020), Guide and experiences of reference for implementing the selective collection of municipal waste 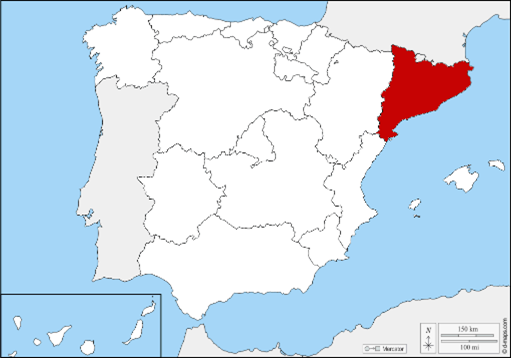 Figure 1: location of the Region of Catalonia (source: https://d-maps.com)