How 12 municipalities in Lebanon implemented sustainable waste management systems with the support of a local NGO.

The project aimed to support 12 Lebanese municipalities in their recycling efforts, targeting cities hosting Syrian refugees. It focused on the following objectives:

• Promote waste prevention and source separation to inhabitants;
• Improve the waste management capacity with the implementation of collection points and recycling centres;
• Raise awareness and train private and public players, as well as the population;
• Create employment opportunities for the refugees.

The project was implemented by arcenciel, a Lebanese based non-profit organization established in 1985. Arcenciel follows the principles of sustainable development, while emphasising on the social and economic integration of marginalised people. They have five working themes, among which sustainable agriculture and environment, for which they develop projects focusing on waste management. Arcenciel operates several sorting centres across Lebanon, and works with about 80 municipalities, either to collect or recycle their waste, or to help them build their own sorting centres.

The Syrian crisis has entailed the exile of more than 3 million refugees to several countries, including to Lebanon, putting a significant pressure on already vulnerable public services and economic resources. To contribute to the improvement of living conditions for Syrian refugees and the hosting communities, AFD financed four projects of local NGOs for a total of €3M. These projects all focused on the involvement and concertation of the local population and refugees, as a way to reduce the tensions between the communities. The arcenciel project is one of them, addressing the issue of waste management.

Lebanon has been experiencing an acute crisis linked with waste management and the saturation of landfills. The refugee crisis added an increasing population that makes it challenging for municipalities to provide basic services to the population. There is a lack of infrastructure for waste collection and disposal, little possibilities to open new landfilling sites, and a general lack of financial and technical resources to provide a proper waste management at local level. In 2014, less than one quarter of waste was recycled, and about 30% was still disposed in uncontrolled landfills.

The project was developed in three steps:

• First, awareness raising activities were developed to promote waste prevention and source separation of organic waste, plastic, metal, paper and cardboard, among others. This consisted in training sessions with the civil society on the 3Rs and the benefit of recycling, study visits to arcenciel’s waste sorting units, and the involvement of private companies for source-separation and the monitoring of collected quantities.
• Then, sorting points were implemented in different areas: public area in municipalities, public and private organisations, and refugee camps. Collection routes were established to bring sorted waste to one of the four sorting centres in Halba, Damour, Baabda, and Taanayel. They are small-scale units, sorting about 100 tonnes per day. There, waste is sorted again: paper, metal and plastic waste is compacted and sent to recycling, while organic waste is composted.
• Finally, the outcomes of the project helped arcenciel to draft guidelines for organising and implementing municipal waste management.

The project received funding from AFD in the order of 1 million euro.

The sale of sorted materials generates incomes for arcenciel: 1,800 tonnes sorted annually generate about €210,000 (based on 2015 data on composition and market prices). Furthermore, the reduction of mixed residual waste led to a reduction in the cost to landfill them.

Arcenciel’s investment capacity mostly comes from its own revenues, and international aid.

Environmental impacts: the project led to the creation of 3 sorting centres in Tannayel, Baabda, and Damour, and to the creation of a waste collection system for recyclables in the 12 municipalities and about 600 different organisations. About 10 tonnes of recyclables are collected every day. Arcenciel sort about 1,800 tonnes of waste per year, mostly paper (60%), plastic (32%), and metal (6%). The project also led to the publication of comprehensive guidelines, listing recommendations with very practical information and quantitative elements for designing waste collection equipment, collection routes, and sorting and treatment units, and indicative costs for most of the elements.

Social impacts: the project allowed the integration and creation of job opportunities for refugees in collection and sorting. The project also contributed to providing a clearer understanding of the municipal waste service by the population, who saw the quantities of mixed waste decrease, along with the health risks linked with the exposure to waste.

• The staff of the NGO underwent a “training of trainers”, reinforcing their technical capacities, and allowing them to deliver the proper messages and know-how to local communities and refugees.
• The involvement of refugees, who actively participated in the project, has helped to reduce the tension between them and the local communities.
• The collaboration with the municipalities, that can decide to entrust part of the waste services or awareness raising on the issue to local NGOs, is also regarded as a factor of success.

The project gives an interesting, community-based response to the waste problem, yet its size is relatively small. To be upscaled, the following elements might be necessary:

• A proper national framework with clear guidelines and targets for municipalities;
• More incentives and economic instruments to contribute to the economic balance of recycling businesses;
• More involvement of municipalities in collection and awareness raising actions

This community-based approach seems quite replicable, as it involves simple technical solutions and small-scale units. The awareness-raising part seems especially important for the success of the system. However, the project was funded entirely with a subsidy from AFD, so resources for the initial investment need to be secured. It seems that income from sorted materials can contribute to compensating part of the collection and processing costs, but will not be enough to reach financial sustainability. NGOs like arcenciel rely on pick-up fees paid by its customers, that are too high for many inhabitants. 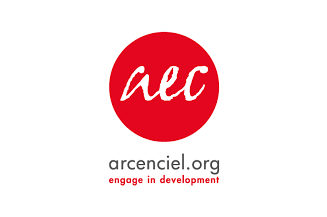